We are joining over 10,000 lawyers in the London Legal Walk

On behalf of Attwaters Jameson Hill posted on Thursday, May 23rd, 2019

In a bid to raise money to support free legal advice charities in London and the South East, we have entered a team of ten into the 15th London Legal Walk, taking place on the evening of Monday 17 June. We will be joining over 10,000 lawyers in the event.

The 10km-long walk starts and ends in Carey Street, behind the Royal Courts of Justice, and takes in some of London’s major landmarks on its circuit.

Last year the walk raised over £830,000 which helped 100 advice agencies to provide free legal advice to thousands of the most disadvantaged people in London and the South East unable to afford legal representation when they find themselves in some of the most challenging situations.

If you would like to sponsor us, our fundraising link can be found here. Any sponsorship is gratefully received. https://uk.virginmoneygiving.com/Attwaters19 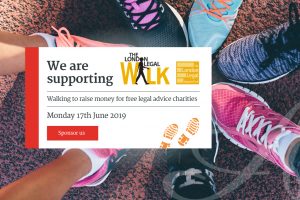